“The very first noble truth of the Buddha points out that suffering is inevitable for human beings as long as we believe that things last – that they don’t disintegrate, that they can be counted on to satisfy our hunger for security.  From this point of view, the only time we ever know what’s really going on is when the rug’s been pulled out and we can’t find anywhere to land.” Pema Chodron

Right now, we cannot help but be right in the middle of the world the way it is – the impermanent unknowable present moment to moment.

Right now, this may look like any number of changes: living with more or less people in your life, in your personal space, more or less to do on a daily basis, more screen time, less clear boundaries or order to your day.  And our response to this will vary, but to the extent we’re suffering, not at ease, anxious, hardened in our hearts, upset, tense, or otherwise, in whatever way that is for us, is precisely the edge of our practice.  Bring more attention to that area of impermanence, and try “let go” of whatever you’re trying to do to make it more permanent

Let go, keep letting go, past the line of “buts,” “I need this,” “If I just say X, if I just do Y, if I just make Z rule… it will be ok”, keep going until you feel a shift, a step, a space on the other side, as if those buts are a fence that push you back. You can step beyond and rest in that 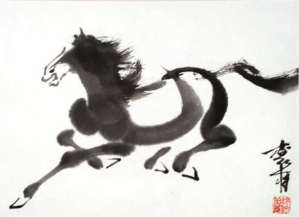 Can we imagine taking this on as our mantra?  “Maybe so, maybe not. We’ll see.”  Or one that I work with in yoga practice a lot; “Let Go.”  Try connecting one of these to your breath the next time you’re on the mat or meditation cushion or taking a walk by yourself. Meet yourself in that field Rumi  was talking about.

“To stay with the shakiness – to stay with the broken heart, with rumbling stomach, with the feeling of hopelessness and wanting to get revenge – that is the path of true awakening.  Sticking with that uncertainty, getting the knack of relaxing in the midst of chaos, learning not to panic – this is the spiritual path.” Pema Chodron

Relaxing in the midst of chaos, becoming intimate with being able to stop the clinging to whatever we feel we can’t let go of, this is the space from which engaged action occurs.  Letting go doesn’t mean not acting, it means acting out of that spiritual place, rather than a place of hardened heart and clinging mind.

Last week I found myself craving a predictable schedule and settling into new routing, as we all dance on the rug that is being pulled out from under us.    When I was able to recognize that I was attempting to control the situation, I was able to pause and let go.  Not because being in control, in an of itself, is wrong.  But rather, because this is an uncontrollable situation.  To the extent that I pursue control and certainty, this is the exact extent to which I will suffer.  No matter that degree of seeming control I manage.  Of course there are actions to take that will help as best as we know now.  But ultimately, we’re not in control, and touching on that, making space in our hearts to hold and be with that, training our hearts to relax into that, is a valuable part of our practice.  This is always the way things are, we just can’t avoid it right now.  Keep these mantras in mind, as you begin to find your new routine and settle in.

“You do not need to know precisely what is happening, or exactly where it is all going. What you need is to recognize the possibilities and challenges offered by the present moment, and to embrace them with courage, faith and hope.” Thomas Merton

And anyway, how often does anything turn out the way you expected it to be? My teacher, Michael Stone used to joke; “Do you look around your life now, and sort of knowingly shake your head and say ‘Ah, my future, just as I thought it would be.’?

-On hiatus for the summer