“Yoga or union is the cessation of the movements of the thinking mind for the time being in order to feel “Who am I?”  Sri Bramananda Saraswati’s translation for Yogash Chitta Vritti Nirodhah

From “Uji” by Dogen 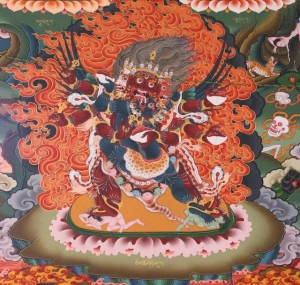 For the time being three heads and eight arms – the wrathful deity. The part of us that pushes back against what’s arising with ferocity, without breath, without our tools. We all have this in us. My teacher, Michael Stone, jokes that it’s called “before espresso” for him.

Once acknowledgement of the wrathful deity comes, we can start with softening: the jaw, the gaze – all the way to the roots of the eyes. We can relax our recently narrowed viewpoint by releasing the soft palette. Then noting the hands, allow them to rest their continual at-the-ready tension as we let go of clinging to what we expected or wanted the moment to be.  At the end of the inhale say to yourself “let”, at the end of the exhale “go”.  If you notice the words migrate to the beginning of the breath, you’ve started to tighten and over-do.

I can be a wrathful deity when I drive. But I had no idea until about three years ago when I started driving again. I had lived for the past twelve years without driving. Now I drive two hours to see my family a few times a month, I drive five hours several times a year for retreat, and once a year I drive eight hours for silent retreat. Those are one way. Now I’ve had a chance to work with it, and I’m happy to report that I’m no longer a wrathful deity when I drive, or only a very minor one…J

Here’s what I learned: