Wise use of sexual energy.

Not really something we speak about much in daily life, and especially not in yoga, and yet compared to how much it’s passing through us, or we’re thinking about it, it’s a bit disproportionate.  Which is perhaps why it’s included in the yoga sutras as one of the 5 yamas.

For monks, it’s a fairly no-brainer yama – celibacy. For the householder, however, the ancient and modern experts agree, it’s a bit more complex.  Recently I’ve looked at the two parts of this particular definition for some clarity in real practice.

Or by contemplating on enlightened sages who are free* from desires and attachments.
(*not free as is don’t have, free as in not ruled by)

Raga – attachment, I like, I want more, awesome, bring it on
Dvesa – aversion, I don’t like, I never want that again, I wish it didn’t happen, yuck

Often compared to ends of a pendulum swing, raga and dvesa are the two reactions we’re constantly running through.  Sometimes they’re “big” swings, and we’re really aware of them, and sometimes they’re smaller, almost subconscious, but going on all the time nonetheless. 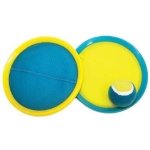 We’re like goalies, in one hand we hold a tennis racket, in the other one of those circular Velcro mitts.  We stand in front of a large soccer net, and use our dvesa tennis racket to hit away all those tennis balls we don’t like, and use the raga Velcro mitt to snag and throw into the net to keep all those tennis balls we do.  Basically doing what we’ve been taught by various forces all our lives – to be happy get more of what you like, and get rid of what you don’t.

The problem is the analogy is wrong, and therefore so is the teaching we’ve been given.  There is no net in the soccer goal, and we’re not really standing in front of it as gatekeeper, we’re more like sitting on top of the post.  The way to true happiness is to see this, and allow all the tennis balls, the ones we like, and don’t, to pass through us.  Without attaching to which ones we like and don’t, without trying to define ourselves as goalies that are great at velcroing in delicious soy lattes, live jazz music and yoga books or racketing away manipulative people, bad soy lattes, and housework.  The more we’re able to allow energies, all kinds, to be things we fully experience, but ultimately allow to pass right through – like breath – the more at peace with ourselves and this life we’ll be.

As Rumi says:
“This being human is a guest house. Every morning is a new arrival. A joy, a depression, a meanness, some momentary awareness comes as an unexpected visitor…Welcome and entertain them all. Treat each guest honorably. The dark thought, the shame, the malice, meet them at the door laughing, and invite them in. Be grateful for whoever comes, because each has been sent as a guide from beyond.”

Or Michael Stone:
“Welcome anger, my old friend! It hasn’t been awhile…”

So, too, with sexual energy. Instead of getting caught up in our sexual likes and dislikes, our likes of our dislikes, or dislikes of our likes, our too much or not enough or not right sexual tennis balls – can we let that energy flow through us as well? Can we embrace being sexual beings without it causing us to suit up in our goalie uniform?  Can we swing from the top of the goal post, delighting in it all and not regretting its passing?

This is the aspect most covered, if it’s covered.  Generally wise use is translated, or considered to mean conserving energy.  This is linked to the idea above – that everything moving through us is different energies. When we choose to connect to one of those energies with our own thinking, the creation of the stories and ideas takes energy.

It’s like suddenly emerging into Times Square. Your eyes go everywhere, you have to process a ton of information mentally, it’s like one of the tennis ball shooting machines went haywire, and has shot all its balls at you within 5 seconds. And you’ve got to racket away or Velcro all those balls in that time.  It’s tiring. Try leaving Times Square and not feel more exhausted then when you entered, even without “doing” anything.

Imagine if you didn’t try to racket away or Velcro in all those balls.  Imagine that from your perch you used that energy, instead to focus on your breath, or practice asana, or prepare a meal for a loved one, or create, or play with your child, or choose just one ball to notice passing by in its elegant journey.  Imagine how much focus, clarity, and energy you would have.  This is the idea behind brahmacarya as conserving energy.  Think about all the times during the day you think about your cravings or lack of cravings or respond to others’ cravings or talk about cravings or try not to talk about them.  It’s exhausting!

“Imagine a stream flowing from a spring and dividing itself off into a number of accidental channels. As long as it proceeds so, it will be useless for any purpose…., the dissipation of its waters making each particular current small and feeble, and therefore slow.  But if one were to mass these wandering and widely dispersed rivulets again into one single channel, he would have a full and collected stream for the supplies which life demands.  Just so the human mind…, as logn as its current spreads itself in all directions over the pleasures of the sense, has no power tha is worth the naming of making its way towards the Real Good…”  –Gregory of Nyssa (via “Yoga for a World Out of Balance” by Michael Stone)

So how do we work with this in yoga?

The amazing Iyengar shares how asana is the perfect ground to practice this:

“The citta is like a vehicle propelled by two powerful forces, prana & vasana (Desire). It moves in the direction of the more powerful force. As a ball rebounds when struck to the ground, so is the sadhaka tossed according to the movement of prana & citta. If breath (prana) prevails, then the desires are controlled, the senses are held in check and the mind is stilled. If the force of desire prevails, the breathing becomes uneven and the mind gets agitated”

Thich Nhat Hanh has provided many helpful guidelines on how to wisely use sexual energy, such as not having a sexual relationship with someone that “if we needed to, we would be willing to spend the rest of our life with, let’s say if the person got pregnant, and so on. And we would be happy to do so and not just do so out of a sense of duty. It doesn’t mean that we do have to spend the rest of our life with this person.” – website.  As well as “I’m determined not to engage in sexual relations without mutual understanding, love, and a long-term commitment.”, and many others.  It would be a worthwhile practice to compile your own list.

And a last shout-out to another website considering different angles of brahmacarya.

One thought on “Brahmacharya”

This site uses Akismet to reduce spam. Learn how your comment data is processed.