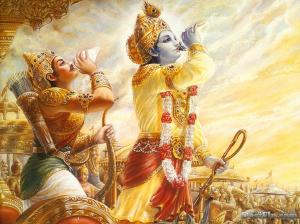 “If, thinking you human, I ever
touched you or patted your back
or called you “dear fellow” or “friend”
through negligence or affection,

or greeted you with disrespect,
thoughtlessly, when we were playing
or resting, alone or in public,
I beg you to forgive me”
BG 11.41-42

In this section of the Bhagavad Gita, Arjuna is apologizing to Krishna for all the times he may have intentionally or unintentionally treated him carelessly or poorly.  The beauty of it is not so much the apology, many of us have made similar apologies. But Arjuna is apologizing because he has suddenly seen that Krishna – his best friend, warrior wing-man, and divine being – is actually in every human being, animal being, or other type of being.  Or rather, every being is actually Krishna, the one he loves above all else, even himself.

We have all experienced, personally or via a movie, the sinking feeling of mistaken identity. Criticizing the food at a party to a guest, to learn that guest is the caterer.  Jostling back the person behind you on the elevator who just jostled you, to turn around and see your boss’s boss.  Ignoring or excluding a new addition to your yoga studio, to realize it’s your teacher’s best friend.

This is what has happened to Arjuna, but he has realized all those careless, mindless actions were done to the divine, he is aghast to think how many times he has jostled, criticized or given the cold shoulder to Krishna, mistaking him for a random human unworthy of more careful consideration.

How many times have we done this? Whether or not we believe that person or other being to be divine, whether or not we cherish them above all others, or love them more than we love ourselves, someone does.  They are incredibly special and unique, no matter how we see them. And this makes this passage a repetition of the Bhagavad Gita’s call to treat all equally, and one of forgiveness as well:

“The same to both friend and foe”

This is a theme woven throughout the Bhagavad Gita, repeated again and again.  In this section, Arjuna is experiencing it personally.  Can we take Arjuna’s lesson as our own?

Can you imagine walking down the street, and seeing the next 5 people as the divine in disguise?  Can you do the same with the first 5 plant and animal beings when you go to the park this summer? Can you allow this to shift your perspective, if even for 5 minutes, while in a crowded plane, subway, car, bus, train, or hiking group?  Can you imagine how it would feel to have some random person see you this way? Can that inspire your own practice?

Can you treat all beings as if they were divine?

Recently I listened to a Michael Stone podcast where he softly defined “mindfulness” as “forgiveness”.  It is an artful discussion which I won’t repeat here, but encourage you to listen to for yourself.

Podcast: Centre of Gravity Episode: Lotus Sutra 20 ~ Forgiveness as the Heart of Practice

What I will suggest is that you take his advice for the practice of mindfulness as forgiveness. And then to go one step further.  As yogis we tend to be too quick to forgive, and it winds up more of a pushing away, and a negating of hurt, then actually fully experiencing and acknowledging the hurt, in order to truly forgive.  So as “dark” and unpleasant as it may seem, as much as a part of you may say “I have no one to forgive” “I hold no grudges”, etc.  Take a moment, and reflect on the people who have truly hurt you in your life, intentionally or unintentionally. Make a list. Sit with each name and each experience, notice what arises.  Spend time seeing if you have truly forgiven the hurt, or if you just pushed away the hurt.  It may result in you re-experiencing the hurt again. This time, use tools of the breath and witnessing without judging, or trying to explain or change or make better, and just be with whatever it is.  When you can stay there long enough, part of you will let go, and release. From there will either arise a teaching, or just the true start of letting go that can allow for forgiveness.

This site uses Akismet to reduce spam. Learn how your comment data is processed.